We made 1500 sculptures for the Oscar-nominated film “Birdman”. Released in late 2014, the film received much critical acclaim and was something of a come-back role for Michael Keaton. We worked on prototypes about a year before the film’s general release and they were sent to the states for the film director, producers etc to see. The last one was sent to Mr Keaton himself who was the one to give the go ahead if he liked it – in fact he liked it so much he kept it. The sculptures were handed out at the Venice Film Festival. They were mentioned in a number of blog ans news articles and even received their own double page spread in Empire magazine.
We sculpted the original, before moulding and casting all the other sculputures by hand; finally we hand painted each one of the 1500 here in our studio. Our model Birdman stands on a plinth which, when a button is pressed, makes the figure say any one of 5 lines from the movie. For this effect, Michael Keaton’s voice was recorded and sent to us in a WAV file. Every single Birdman was then labelled on the underside, written by hand “1 of 1500, 2 of 1500 and so on up to 1500 of 1500, made in London” The brief was that these were to be a very limited edition and they were not to look like they had been factory produced. 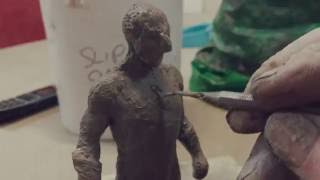 The Making of the Birdman Mini Figures Part 1 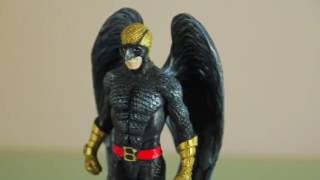 The Making of The Mini Birdman Figures Part 2 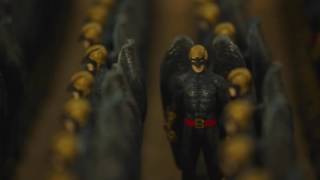 The finished figure is seen here with risers, which allow the poured casting resin to reach all parts of the small figure, and the first pour of silicone which captures all the detail.

Lots of moulds in use, the wooden casing helps keep the silicone part of the mould together and makes it easy to pour the resin

Taking Birdman out of the mould

The CAD drawing for the detail on the bases that Birdman was to be fixed to. The underside of each base had CNC cut recesses to allow us to place a speaker, circuit board and wiring that was connected to a small brass button on the upper side of the base which, when pressed, played a track of 5 different phrases recorded by Michael Keaton himself.

Every one of the 1500 Birdman figures was carefully painted by hand.

Our scenic painters are used to painting large areas but they rose to the challenge of painting our miniature Birdman figures.

Only a fraction of the amount

We thought it would be a good idea to stand them all together to see just how many we had made. The video of the making of Birdman can be seen here https://youtu.be/yYWAT2OjfS4

boxed and ready to go

The client wanted the Birdman figures to present to producers, directors, actors (Michael Keaton kept one for himself) and here they are in presentation cardboard boxes ready to be stacked in to pallet boxes and shipped out.

The filming of Birdman

The filming of BirdmanOur client wanted to make a short movie of us making the Birdman figures to promote the actual Birdman movie. Damien Sung (https://vimeo.com/damiensung) is seen here shooting us opening up one of the moulds.

Not all the figures made it out alive.

Take a look at some of the kind words our client said about our work:

We have worked with spur creative on numerous projects over the years and have always found them easy to deal with and utterly professional. Whenever we are asked to source something fantastic I always go to Spur first and will continue to do so because their work is impeccable, which inevitably reflects well on us when dealing with our own clients.