Our friends at Plunge Creations passed our details to 05 Creative who had a project that was right up our street and so we were very happy to get involved. They were working with Hi-Rez Studios, a game developer, who have an online game called Smite. They needed a chicken and a Thor hammer with lightning effect.

We began by sculpting the chicken in clay. Our client only had 2-D images, and didn't have any 3-D artwork, which is generally what we are given, so sculpting in clay gives us a certain amount of freedom, and allows our cients to visualise the character development as it happens. Our sculptors are talented individuals who can work from AutoCAD drawings, 2-D images, 3-D rendered artwork or sketches, and sculpting with clay gives a fluidity and organic structure to our work which 3-D printing or 5-axis CNC simply can't achieve, something our clients find invaluable.

The Thor Hammer was sculpted in clay over a formed MDF structure. We routered lines in the MDF where the main light would show through, and sculpted lightning strikes in the clay.

The handle of the Hammer

The handle of the hammer, again, sculpted in clay. All the small detail was sculpted, moulded and cast in resin and then fixed on to the handle once it was cast in fibreglass.

The chicken in its newly made mould.

The cast handle for the hammer with the resin cast detail fixed in place.

The fibreglass chicken out of the mould and sanded and filled ready for a spray of resin coating.

Smooth and ready for paint

The resin coating which we apply over the sanded fibreglass helps to give a uniform, smooth finish.

The hammer, cast in fibreglass and being positioned over the floor that 05 Creative supplied us. we had to make it look as though the hammer had hit and cracked the flooring. Here is one of our sculptors working out the best position to set it.

Testing how well the light shows through our almost complete hammer. The LED lights were bright and showed through the thinner lightning areas beautifully.

When it comes to painting games characters, we spray paint the props. Here, the chickens eye lids an beak have been spray painted and we will then mask around these and spray the rest, which gives a really graphic, high end finish.

The hammer needed to look metallic so our scenic artist is dry brushing metallic powder on top of the paint to really bring out the highlights and give a really convincing metal look to the prop.

The hammer in all its glory

The hammer, painted, lit up and sat in the broken flooring sections.

Our client from 05 Creative with two happy Hi-Rez team members getting a selfie next to the painted chicken.

After the gaming expo in Germany, Hi-Rez kept the props in their London office. We hear that their USA office have their eyes on the props and want to ship them over there to display in their own office.. Luckily, we have the moulds and so, should they want exact copies of the props, we will be only too happy to oblige.

The chicken in Hi-Rez offices

The chicken, also in pride of place in their London offices. 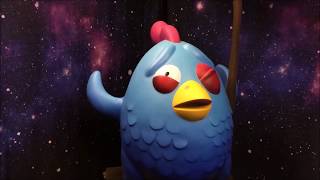 The chicken and hammer being made from sculpture through to painting.

What we had to do

Hi-Rez had 2-D images of their chicken character and Thor’s hammer and it was our job to realise these in their 3-D form. The props were to be shipped to Germany for a gaming convention to promote their online game, Smite.

So how did we do it?

The chicken was straightforward; he had to be stood on top of a chest while holding a flag pole. We sculpted the chicken in clay, then made a mould and cast it in fibreglass. The chest was also scupted in clay and moulded and cast, and the chicken was bolted on top of this. The flag pole was made with timber with a plastic composite and printed vinyl for the flag. The hammer was a different matter altogether. In the past we have made props that need to light up so we were confident that this could be achieved easily enough, but we wanted the light to actually behave in a way that lightning would, so we programmed LED lights to flash sporadically, not yet knowing whether this would emulate  lightning when inside the finished hammer. The parts of the hammer that needed to light up had to be cast in a thin, translucent material so that the light from the LED’s would show through and look convincing, but we knew that this would weaken the hammer making it difficult to get out of the mould, but because we’ve worked with moulds and casting for many years we were confident that it would work, and it did. The hammer was set in sculpted broken sections that we painted to match the flooring of the venue where it was to be displayed so that it looked as though it had been driven in to the floor breaking the surrounding area.

The props were placed in to their bespoke flight cases and shipped off to Germany. Our client loved them as did Hi-Rez Studios who sent the hammer to their USA office once the convention had come to an end so that it could be used in The States to promote the game there.

What our client said

What can I say, Spur Creative are amazing!  They produced 2 large props for our client (a games company) and they were superb – extremely high quality and a perfect representation of the in-game characters.
They understood the requirement of the event and how to create a prop that would create impact.  Spur involved us throughout the process, consulting and offering solutions regarding the prop design in terms of colour, form & texture.
Overall, the team is highly talented, creative and a pleasure to work with.
Thank you so much Phil & team!