MENUMENU
A magic tap built for The Boat Show; the tap looked as though it was suspended in mid air held up only by the jet of water. We used a submersible pump to keep the flow of water coming from the tap spout and to help the illusion. This project was for a water filtration system company who were exhibiting at The Boat Show, and we certainly enjoyed doing it. It was different to anything we’ve done before given its incorporation of flowing water; however, we do love a good challenge here at Spur Creative. 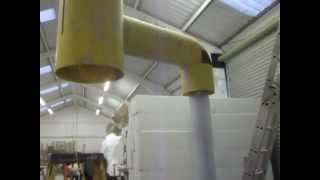 We drew the tap in AutoCAD in order to make sure everything was sculpted and put together exactly, as the project was complex and relied on accuracy to suspended the tap in mid air with gallons of water being drawn up through the main aluminium tube and cascading down again, giving the illusion that the tap was magically suspended by its own flow of water.

We drew up plans and designed AutoCAD drawings to make the aluminium section that would hold the tap suspended above the water reservoir. We rolled a sheet of opaque acrylic around the aluminium tube to disguise it and also to guide the fall of the water down in to the reservoir

After a few attempts to get the water flow looking as naturalistic as possible, by altering the amount of water passing through the pump and getting the acrylic sheet to sit just right around the pole, we had it looking as if the water was gushing from the tap

The tap at the show

The tap in all its glory at The Boat Show

What we had to do

Before approaching the challenge, we had to think carefully and consider everything in order to create our magical vision, including:

So how did we do it?

The pump was probably the biggest challenge that we had to overcome, and took a lot of research to get it done to the way we wanted. Luckily, our SFX guy was on hand to help! Once we had the pump in our studio, we had to try it out. Without giving away too many of our secrets, it was very much a case of trial and error to get it right. The same went for creating the illusion of suspension – we got there in the end thanks to the pure determination and skills of our workforce.

Despite its challenges and having never done anything like it before, this entirely bespoke model was a real success, proving the hard work and determination of every member of our team. We were able to put all of our skills together to pull off this complex project to the highest of standards – and it was a lot of fun too!
More On Our Polystyrene Carving