We work very closely with Ralph Lauren Europe and have had a very good relationship with them for many years, working on all of their seasonal display briefs. We are given designed briefs from the creative co-ordinators at Ralph Lauren and asked to provide samples swatches of the materials and finishes we think would work best with their designs. Once these are approved we are asked to provide prototypes of all the different elements. If there are any design changes needed, we set about making alterations before going in to production. Because we ship all over Europe, we have to make sure that everything is durable yet lightweight, to keep the delivery costs to a minimum, but also to ensure that shop staff don’t have to struggle when dressing the windows with our props.

More often than not there are large numbers of different props to make and we have only 4 to 5 weeks to make everything, but we always hit our deadline and have never missed one. As trusted suppliers of Ralph Lauren, we are given a certain amount of free reign when it comes to the design brief; we are given designs from their creatives and always aim to achieve exactly what they ask for, but on occasions there are changes that we suggest which we implement, and we are asked to design elements of the brief. We designed some two meter high gates that had the Ralph Lauren log within the intricate floral pattern, we designed the pattern that was printed on to self-adhesive vinyl and applied to Chinese vases, and we designed over one dozen different wooden toys from a bi-winged plane to a dolls house that had hinged front doors and a staircase leading to a second floor, to a train set with a front truck and four carriages. We are asked to make these whenever a new store opens somewhere in Europe.

We have made hot air balloons that were suspended from the ceiling, aged concrete effect urns and plinths, Chinese style fibreglass vases with intricate patterned detail, snowmen, sandcastles, surf boards, barrels, MDF plinths and podiums, seagulls, drums, signs, fibreglass logs that were made using a mould taken from real bark, hundreds of tartan covered gift boxes, bronze effect polo players on horses, light houses, giant crayons and pencils. The list goes on.  It is fair to say that we love the work we do and love working with Ralph Lauren who always ask us to make something interesting. 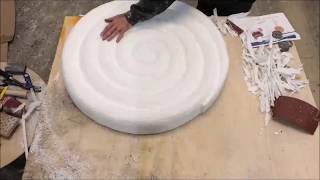 Watch us making lots of giant lollipops. Firstly, we sculpted a lollipop with polystyrene, then we moulded and cast one in fibreglass to make a smooth finished master. From this master we made more moulds, cast the lollipops in fibreglass and hand painted the swirls. With a high gloss lacquer coating they looked good enough to eat.

For the 2018 summer season we had to make many beach huts, all of which had to be lightweight and pack flat. Because we ship everything we make for Ralph Lauren all over Europe, we are always conscious of weight and size when it comes to designing any props due to shipping costs. Ralph Lauren send us their design ideas and briefs and it is our job to come up with making their designs work practically, so a lot of forethought goes in to every project. Once we are happy that the designs will work, we manufacture everything in-house, paint and package, so it is in our interest, as well as the clients, to get it right prior to embarking on any work. These beach huts had to look weathered and so our scenic artists had their work cut out as there were a lot of them to make and 3 different designs, all painted by hand.

This tree, which was placed around an existing column in-store at Ralph Lauren's flagship Children's Wear store at Bicester Village, was very large and wide and had to fit a very specific height and fit nicely around the column. With branches that spread out a good few metres, the challenge was to make sure it looked good aesthetically, but also that it was safe once installed. It was sculpted from polystyrene clad around a metal and timber frame, we then cast the bark texture in fibreglass, taken from a mould we took from a real tree trunk and the leaves were hand die-cut from a fire proofed card, each one being hand tied to the branches. The topiary horse that can be seen in the image was a previous prop we made.

Spring 2018, and for all Women's Wear outlets, we made vintage Citroen vans, each one utilising carpentry, polystyrene sculpting, moulding and casting in fibreglass, vacuum-forming plastic, buying real Citroen parts, spray-painting and vinyl application. They all had to fit different sized windows, had to be lightweight, able to be flat-packed and made in such a way that visual display staff could build them easily on-site with nothing but a spanner, which we supplied to each destination. A tall order, and they had to be no deeper than approx. 400mm but look as 3-D as possible. Because Ralph Lauren work ahead of time, we started making these, along with a host of other props for Men's Wear and Children's Wear outlets, in November 2017 and in between Christmas and New Year, and a few very late nights as well, but as usual, we had everything made and wrapped and shipped for the deadline. Then it was on to the next season.

As part of the 2010 Holiday season we were asked to make some signs that were to look rustic and wintry, and our in-house sign writer loves the chance to show off his skills.

We made horse jumps and fences along with boxes full of flowers, hay bales and horse shaped silhouette hedges for Spring 2014

For Spring 2016 we made over one hundred hot air balloons in different sizes, each with its own wicker basket and netting to give them a vintage look. We designed and printed self-adhesive vinyl stripes to adhere to the fibreglass balloons, which had to be extremely lightweight as they were suspended from only a self-adhesive eyelet fixed to the ceiling of the many stores. In addition to the balloons we sourced hundreds of wicker basket plinths that were used for point of sale display, and made lots of New York subway signs.

For a new store opening we made one of our many in-house designed wooden train sets, wooden tractor, drum set and MDF painted ABC blocks which were used to display products.

We made approximately 50 stylised seagulls which were suspended from the ceiling in the windows of multiple European stores. We used the roto-mould method to make them which allowed us to play with the roto-mould machine we had built for such projects. Roto-moulding is where a silicone mould is made and resin is poured in to the mould, and then, in our machine, we turn the mould slowly to allow the resin to form inside the mould, flowing in to all the parts of the mould until the cast is set. This method allows us to make multiples of objects up to approximately one meter in diameter and height.

As part of the spring 2016 display brief we had to make New York subway signs. We had the letters CNC cut and the signs themselves were also CNC cut with locating pins to take the letters. These had a surround, also CNC cut and everything was bonded together and attached to a free standing plastic pipe ‘signpost’

For Ralph Lauren Holiday 2014 window displays we made wooden birdhouses with frost and snow and icicles which were placed on top of silver birch stands. As part of the brief, we also had to source hundreds of silver birch logs which we found locally thanks to The National Trust’s Scotney Castle, who we had previously made a replica wedding cake for their museum. The head warden allowed us to choose which silver birch trees we thought most suitable from the stock of trees picked for felling that year. They even kindly collected and delivered them to us so that we could chop them down to make log plinths, tables and chairs and stands with. It took one member of staff one week just to cut the trees down in to workable sizes, but the results were worth it as there’s nothing more authentic than an actual tree when used for a display.

Another drum set and some painted MDF RL letters; we had these CNC cut and then glued two 18mm thick MDF letters together, sprayed them with a polyurethane resin, then sanded and finished ready for a cellulose primer and cherry wood paint effect. We make RL letters and ABC letters on a regular basis for new store openings.

We made these beautiful fibreglass pencils with the Ralph Lauren logo embossed in to the sides in to which we poured a fast casting resin which made the embossing look like that of a real pencil. These were made as prototypes and, although the creative co-ordinator and her team loved them, it was decided to go down a different route to the disappointment of the Ralph Lauren team and, especially, us because we would have loved to have made more of these.

Take a look at some of the kind words our client said about our work:

Spur Creative are a delight to work with.  Props produced are always met with such attention to detail and finesse and their expertise and knowledge is always trusted and injected into projects, in order to achieve the vision of the supplied brief.   I have worked with Spur Creative for nearly 7 years and without a doubt would recommend their services and will continue to work alongside them for years to come.  If it is elevated, creative and bespoke props that you are after then Spur Creative should be your first point of call